At the Yugoslav Cinematheque, the 66th NIN Award for Best Novel in 2019 was presented to Saša Ilić for his novel “Dog and Contrabass” (Pas i kontrabas). NIN also marked the 85th anniversary of the first issue. The award was presented to 66th winner Saša Ilić by NIN Prize Jury President Teofil Pančić, and excerpts from the award-winning book were read by actor Tihomir Stanić. Ilić expressed his gratitude for the recognition and recalled that Dubrovnik comedian Marin Držić spoke about the world stage where the soulless (evil, envious people) and the soulful (wise, good people) alternate.

– Držić said that there have always been more soulless people, but, although they lead the battle, one can easily identify which ones are the first and which ones the latter. Some are genuine and others are soulless and will remain dispirited  – emphasized, among other things, Ilić, adding that among novel writers there are also those that belong to the soulless or to the soulful group, which can be recognized in the long history of the NIN Award which was handed to him last night. The writer won the applause of the audience and among the many guests in the full ceremony hall were: Thomas Schieb, German Ambassador to Serbia, Jelena Drakulić Petrović, director of the Ringier Axel Springer media, writer Božo Koprivica, director Goran Marković and many others. Part of the award is a prize in the amount of one million dinars, and the sponsors are Sberbank, as well as domestic and foreign companies that have decided to remain anonymous in order to focus all their attention on the writer and his work. Commenting on the 66th NIN Award for the novel, but also the recognition for the Person of the Year given to Aleksandar Obradović, in the 85th year of publishing NIN, editor-in-chief Milan Ćulibrk said: – We will strive to leave NIN to the future generations such that they will be proud of it. That they’ll never be ashamed of anything.

The NIN Award is the literary criticism award for the best novel of the year and is awarded by NIN. The NIN Award was first awarded in 1954 to Dobrica Ćosić for his novel Roots (Koreni). For the past half a century, it has been awarded to writers from all over the former Yugoslavia. The only triple winner was Oscar Davičo, while double winners were Dobrica Ćosić, Živojin Pavlović and Dragan Velikić. Davičo is also the only NIN laureate for two consecutive years (1963 and 1964). The award has been awarded only five times to women writers – Dubravka Ugrešić in 1988, Svetlana Velmar-Janković in 1995, Grozdana Olujić in 2009, Gordana Ćirjanić in 2010 and Ivana Dimić in 2016. The award was not granted only in 1959, which was a precedent created to stimulate quality. That is when Miodrag Bulatović, with his novel “The Red Rooster Flies to the Sky” (Crveni petao leti prema nebu), remained without the award. However, later in 1975, Bulatović still received the NIN Award for his novel “People with Four Fingers” (Ljudi sa četiri prsta). The NIN award was returned by Danilo Kiš, awarded in 1972 for the novel “Hourglass” (Peščanik), and Milisav Savić, who received this recognition in 1991 for “Bread and Fear” (Hleb i strah). The winner of the award is decided by the jury by a majority vote of its members. The winner for 2018 was Vladimir Tabašević for the novel ” Saint Sebastian’s Delusion” (Zabluda Svetog Sebastijana). 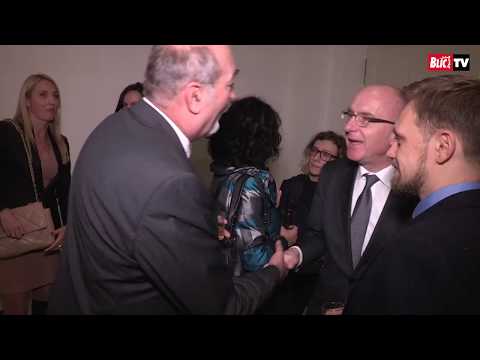