“Born at the same time as Blic Zena” 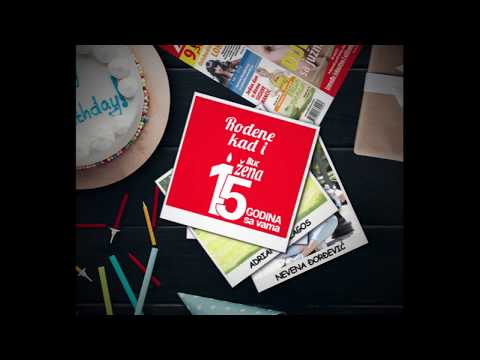 “Blic Zena”, the most popular, widely read women’s printed magazine with the highest circulation celebrates its 15th birthday this November. The secret to securing quality and longevity lies in the concern for every reader, as well as in serious work and dedication of a small female newsroom. Since 2004, “Blic Zena” has had the same fervor in successfully finding and communicating, as the slogan says “Real advice for real women” and offering solutions to problems with which the modern women are faced today.

On the occasion of its 15th birthday, “Blic Žena” launched the campaign “Born at the same time as Blic Zena” in August, showing 15 of the most successful girls in Serbia over the course of 15 weeks. They were all born in 2004 just like “Blic Zena”, and are just as persistent, combative and powerful. The editorial board believes that it will constantly write about their successes over the next 15 years.

Some of them, which we have already presented to the millions of readers in the past few weeks, are the new wonder of Serbian athletics Adriana Vilagos, the world spear throwing champion; Nevena Djordjevic, chess champion of Serbia; Magdalina Tmušić, the best in literature in Serbia… because 2004 was the year in which champions were born.

“We are proud of our 15 years of existence, just as the parents of these wonderful and smart children are proud of them. We wanted to draw attention to the young ones full of potential who, one day, are sure to fill the columns of “Blic Zena” and who will be the subject of another one of our recognizable actions: ”Best women of Blic Zena“, said the editor-in-Chief of the Media center for the content for women at Ringier Axel Springer Serbia, Jelena Isaković, while the editor-in-chief of “Blic Zena”, Sandra Subotin, added: ”For 15 years, “Blic Zena” has been writing about the brave, successful and powerful women who have been an inspiration for our readers, and for us as well, in various life circumstances. There has been a great deal of campaigns and actions that we were proud of in all these years, and the one we are organizing for our 15th birthday is especially dear to us. By giving medals for success, we wanted to give these exceptional girls a boost and show that in addition to their parents, coaches and professors, someone else thinks about them and cheers for them. I hope we can go a long way together”.